To my readers: I apologize for the raging quiet that has permeated this blog for a number of months. Booming business, my father’s failing health, and a plethora of other commitments and obligations fight for my time and this blog suffers for it. I hope to be be able to increase my posting frequency in the coming months. 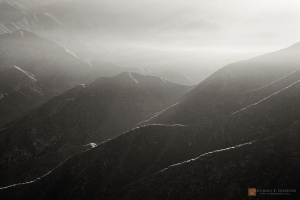 My being and spirituality has always been directly tied to nature and wildlands. I was born in Los Angeles (a distinctly different city nearly 50 years ago) and first experienced and fell in love with the local San Gabriel, San Bernardino, and Sierra Nevada mountains as a very young boy. While many of the memories of those early experiences are no longer with me, the experiences themselves have indelibly shaped and defined the person I was to become. I studied the obligatory classics of my preferred genre: John Muir, Aldo Leopold, Edward Abbey, Wallace Stegner. If it was not my experiences that would shape me, the words of these writers certainly would have. Their books became my bibles, and the only thing I cared about (and still care about) was spending as much time as possible in wild nature: In my happy place, away from people, away from civilization (or “syphilization” as Abbey called it). I distinctly recall my mother back then telling this teenager that he had no business complaining about anything if he wasn’t willing to vote or put his money where his mouth was. It was she who was responsible for creating the activist I was to become. I was registered to vote by the age of eighteen and by my early twenties had a fat three-ring binder containing hundreds of copies of letters written to and replies received from Presidents, Senators, and Congresspersons about all the issues that concerned me and our planet.

In the decades since, I have walked, hiked, and climbed thousands of miles in California. I have summitted hundreds of its mountains (including many of the state’s highest); have been a volunteer patrol ranger on the San Bernardino National Forest (for which I received the President’s Volunteer Service Award in 2008); have served on the Board of Directors for the San Gorgonio Wilderness Association; and am currently serving on the Board of Directors for the Mojave National Preserve Conservancy. Since 2007 my photographs have been instrumental in the campaigns of The Wilderness Society, Campaign for America’s Wilderness, National Parks Conservation Association, Pew Charitable Trusts, among others. Throughout my life I have fought for the preservation of wildlands and for doing what is right for the land. The latter is a position which Aldo Leopold argued for nearly 75 years ago. His ideas were brilliant and before their time yet few listened. 75 years later, wildlands have shrunk right along with our glaciers and much of our country is on the brink of ecological collapse.

In his piece on Politicizing Art, my good friend and workshop partner Guy Tal writes about disassociating his own political convictions from his photographic work and explains why he chooses not to be a public activist. Many artists choose a stance similar to his. Using my own photographs and art for activism and conservation seemed to me necessary and mandatory from the start. I have always believed that the most honorable purpose for my photographs would be their use in conservation and I desired following the footsteps of Ansel Adams, Eliot Porter, Philip Hyde, and the Sierra Club tradition of using photographs and coffee table books to advance legislation and protection for wildlands.

In 2010, under contract of The Wilderness Society, I began photographing what at that time were termed “Solar Energy Zones” on the California desert. I was only then beginning to understand the possible and forever damage that could occur on my beloved Mojave Desert. My heart was crushed as I photographed vast swaths of desert wildlands that were impossible to envision covered in thousands of solar panels, 500-foot tall thermal power towers, and eagle-killing wind turbines. I have since committed to photographing all threatened California desert wildlands, and am proud that my photographs have been used to help kill at least three proposed ill-sited development zones (Pisgah, Iron Mountain, Palen).

In recent months, I have attended numerous public and private stakeholder meetings opposing utility-scale renewable energy developments on undisturbed California desert. I always have large prints in tow. While it’s easy to dispute confusing language and policies (such as with the recently-released 8,000 page Desert Renewable Energy Conservation Plan), the right photographs are able to clearly and powerfully demonstrate exactly what is at stake. Last week, I was invited by the Sierra Club and National Parks Conservation Association to lobby the Los Angeles City Council against entering a power purchase agreement from the proposed Soda Mountain Solar Project. I had two 60″ panoramic prints in tow and their impact was undeniably felt. A few weeks prior I was invited to a private meeting with the Bureau of Land Management (BLM) to discuss the Silurian Valley solar proposal. Again, I had large and small prints in tow (both landscape and wildlife) and their impact was undeniable.

In 2010, under contract of The Wilderness Society and the San Gabriel Mountains Forever campaign, I created a catalog of images to help advance the then-proposed National Monument designation for the San Gabriel Mountains. I am very happy to report that President Obama is screwing up traffic in Los Angeles today (October 10, 2014) to announce our newest National Monument!

Should artists avoid politicizing their art? Should photography and politics never be mixed? My personal life, spirituality, and profession are all intermixed and dependent upon nature and wildlands. I will not peacefully and passively accept the development and destruction of my beloved lands any more than I’ll permit an act of violence against a loved one.  If not me, what other artist will stand up and fight? If the power of beautiful photography can convince others of the need for protection and conservation of our vital wildlands, I want to be on the front line and I want those photographs to be mine.

You are visiting the blog of fine art landscape photographer Michael E. Gordon. For additional photos and information, please visit his official website. You can also find Michael on Facebook, Google+, and  Twitter.

Anyone can do the craft. Only the individual has the unique personality to build a point of view. Al Weber

My good friend and extraordinary photographer and writer Guy Tal recently interviewed me on his blog. Mine is the second installment of interviews Guy is conducting with photographers he considers “creative and innovative” (he’ll also need to interview himself in a future installment). Guy’s questions are unlike the typical ones you’ll find in interviews with photographers; they’re thoughtful and in-depth, and I had to dig deep for my replies.

The most important question Guy asked pertained to my treatment of my images as “expressive art rather than purely a medium for capturing natural beauty“. Before I proceed any further, I’d like to have you reread the quote at the beginning of this entry. Indeed, anyone can do the craft – more so today than ever before. Even amateur photo hobbyists now own 16-18mp D-SLR’s purchased from Costco or Sam’s Club, and if they point them reasonably well, they, too, can produce “professional quality” photographs. But simply owning a high resolution D-SLR and Lightroom 3 makes you no more a photographic artist than me describing myself a writer for owning an expensive keyboard and a WordPress blog. No matter how technically stunning your work – and despite rationalizing that it’s “your unique take” – you can’t own your photographs when they are composed of common subjects and grand views captured similarly by others from the same viewpoints and perhaps with better gear and possibly even under better light. Alternative or derivative? Indeed, but unique it will not and cannot be. The trap of becoming involved in the landscape photographer’s “circuit” – whereby a number of photographers shuttle around North America photographing mature subjects during their peak seasons (hopefully with “epic” light) – is that you’re not likely creating images for yourself or for your audience. You’re instead likely involved in the photographer’s rat race of one-upmanship: “I can do it better”.

I’d like to share a secret: buyers of photographs don’t care about location-based photography (photo-stock excluded) nor do they care about how close you came to dying or how you lost a camera and lens while producing the photograph. Buyers buy because a) they are too moved by your photograph to not buy it b) they have a direct connection to the subject or particular elements within it. It doesn’t matter that you have the very finest Moulton Barn photo of the thousands that are out there (millions?), and it doesn’t matter if you’ve captured the most epic light ever over Coyote Buttes. If your audience has no connection to these places, you simply cannot sell them a print no matter how hard you try.

Instead of trying to separate yourself from the photographic herd only by way of technical excellence (which, by the way, does not matter to buyers), consider building a point of view to share with the world. You’ll first need to develop this, of course. Everyone is quite aware that nature and natural landscapes are beautiful, so sharing the beauty of nature and landscape is not sharing your point of view; it merely affirms what is already celebrated. Dig deep into your collection of photographs; find common threads through the work which you can claim as your photographic voice and yours alone; and continue to develop photographs and themes that reinforce your unique point of view. You do have one, and the world is interested in it (if this were not the case, every nature/landscape photographer post-Ansel Adams would be a complete failure).

I am far from being the first (and last) landscape photographer to shoot the places I do and using the tools that I do. I am not the first to photograph the Mojave Desert, Joshua trees, or the Sierra Nevada, but I am the first to present my point of view of these subjects and places. It is the only way I know how to work, and it is the only work that I believe is worth doing. I don’t need to run about North America photographing its most photographically mature subjects, and I have little reason to outdo other photographers. I work in my own arena. I care only about making photographs of subjects I love and can portray in a way that I can say is uniquely mine. When I do this most effectively, compelling photographs emerge. Epic light and icons be damned – I can even sell prints of busted vehicles.

Stop paying attention to what other photographers are doing. Photograph anything you want. Do it with your voice and your point of view. If you can do this with love and conviction, success will be yours.

PS: I am judging Guy Tal’s Ten Weeks of Creativity contest this week, and I want to see your unique point of view! Guy’s got great prizes lined up for each weekly winner – enter your photographs now.

You are visiting the blog of fine art landscape photographer Michael E. Gordon. For additional photos and information, please visit his official website.