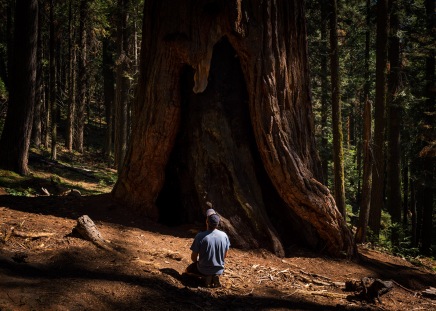 For many years in the West we’ve been hearing and learning about drought-stressed trees (USDA Drought Monitor), bark beetles, and climate change. My anger is justified when the 2016 GOP Presidential nominee comes to California for money and support and declares that our drought is political, not real.

During my adult life, “permanent” snowfields in the High Sierra have disappeared; its glaciers are dying; and alpine ice climbs I once made can no longer be repeated (not until the next ice age, anyway). I’ve also experienced the disappearing glaciers of Glacier National Park (expected to be gone by 2030) and near and dear to me, Joshua Tree National Park could lose its namesake trees by the end of this century. Overt signs of climate change are available everywhere in the West – if one is paying attention and not politically motivated to deny them.

Following the opening reception of my latest exhibition in Sacramento, California, I decided to take the longer and slower route back to Southern California through the western side of the mighty Sierra Nevada mountain range. As a lifelong hiker, climber, and lover of the Sierra, I have always enjoyed its tremendous diversity. The east side of the range rises abruptly more than ten thousand vertical feet over the Owens Valley – from high desert to the alpine zone and the granitic massif of Mt. Whitney in just a few short horizontal miles. By comparison, the west side of the Sierra makes a long and gradual rise from the San Joaquin Valley towards its mighty crest – nearing sixty miles at its widest – containing chaparral and oak covered foothills, shadowed and fern-filled forests containing massive conifers (including the world-famous Giant Sequoia/Sequoiadendron giganteum), and life-giving rivers (the Kern, Kaweah, Kings, Merced, Owens, and many others) that make habitation and agriculture possible in otherwise arid California. While the East side is the dry side of the range, the west side is typically forested, wet, and green – lush and verdant by California standards (Pacific Northwesterners are laughing). My recent tour of the range, however, has forever altered my view. The Sierra Nevada will never again in my lifetime look the way I once knew it.

On August 11th – the day before I began my drive to Sacramento – I received from a friend a link to a disturbing article: “Forests of fatalities: after 70 million tree deaths, worst “still to come“ – which highlights tremendous tree mortality throughout the state. A Washington Post article of December 2015 similarly suggests “fairly consistent predictions of widespread loss of piñon pine and juniper in the southwest, sometime around 2050.”As I headed north on Interstate 5 through the San Joaquin Valley- the Valley that feeds much of America’s humans (not its livestock) – I was shocked to see so many dead crops, dying trees, and fallow fields. Some of these “Central Valley” communities have gone dry in recent years and have had to truck in water just for human consumption.

Outside of Yosemite Valley, my busy schedule over the last couple years had kept me away from most of the western Sierra. My return was met with much shock and sadness. The U.S. Forest Service has declared that Sierra tree mortality jumped eight-fold from 2014 to 2015 – from 3.3 million dead trees to 29 million dead trees. In 2014, I might have suggested that there were no dead trees in the Western Sierra. No matter where one looks now, a sea of dead trees encompasses the view. 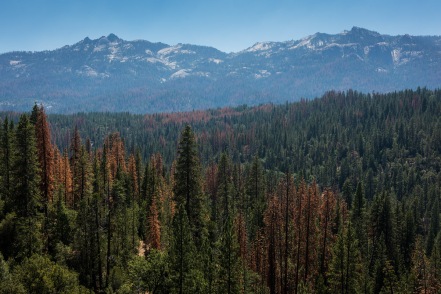 As I made my way from Sonora to northern Yosemite National Park, I traversed some new ground and received yet another horrifying glimpse of Rim Fire aftermath. I was in Yosemite NP while the Rim Fire burned and distinctly recall near zero visibility at times. That fire had begun and consumed approximately 400 square miles of Stanislaus National Forest and Yosemite NP just three years prior. The view from a prominent overlook revealed not a verdant green forest filled with undergrowth, deer, and birds; rather a brushy and barren landscape that will likely never return to its former verdant glory (not in our lives). 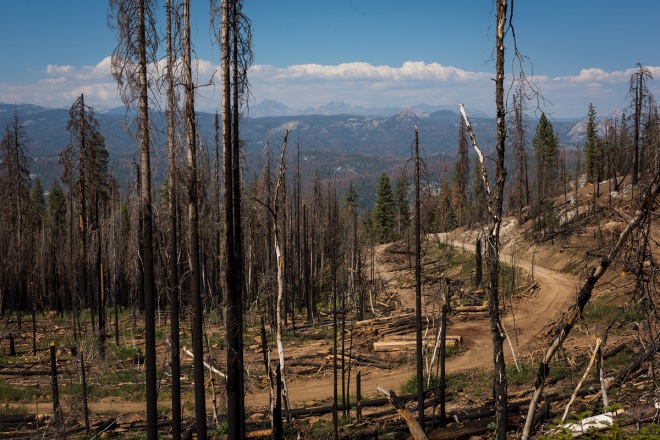 Can’t see the forest for the dead trees. 2015 Willow Fire aftermath – a long view to Mounts Ritter and Banner in the Eastern Sierra

Making my way further south only revealed more horror. For the first time I got a glimpse of the 2015 Rough Fire aftermath which ravaged Sierra and Sequoia National Forests and parts of Kings Canyon NP. A prominent overlook of Kings Canyon revealed a nearly desertified landscape, looking more akin to dry southern California ranges than the Sierra I once knew. I found myself becoming more depressed about the bleak devastation before me and believed that climbing a mountain might deliver good tidings – I headed further south to Mineral King Valley (Sequoia/Kings Canyon NP).

Sawtooth Peak (the prominent fin on right), Needham Mountain (behind), and Columbine Lake. Mt. Whitney is visible far to the east.

I aimed for Sawtooth Peak, six miles and 4500′ elevation gain from my camp in Mineral King Valley. I started walking early to beat the heat and meet my wild neighbors who keep different schedules. Along the way I met at close range numerous marmots, grouse, squirrels and velvet-antlered mule deer. Walking alone and quietly always brings rewards. As I neared Sawtooth Pass, I began to see smoke moving my way from the south.

Hiding out under the trees of the Sierra for several days prior, I was unaware that yet another fire had erupted while I journeyed south. Daily sky views to that point had never been promising. Always orange or gray – never blue – the central California sky had been altered for weeks by the Soberanes Fire on the coast (erupted on July 22, still active at time of this writing).

As I neared the summit I saw a huge plume to the south. My heart sunk; not another one!? At first I believed that it might be the Blue Cut Fire on the San Bernardino National Forest far to the south – it had only begun a few days prior. Little did I know that the Lake Isabella region was getting hit by yet another new and quickly-growing fire (which had suffered the devastating Erskine Fire only weeks prior).

Climb the mountains and get their good tidings. Nature’s peace will flow into you as sunshine flows into trees. The winds will blow their own freshness into you, and the storms their energy, while cares will drop off like autumn leaves. John Muir

I look distressed. Self-portrait on the summit, with the rugged Kaweah Peaks behind me

Quiet walks in the wild and climbing mountains has always been my antidote. It uplifts, it nurtures, it restores, it heals. But good tidings diminish quickly when even the view from a summit leaves one with a feeling of anguish. I stayed as long as I could. The air was getting thicker with smoke, my breathing was altered (especially at more than 12,000 feet above sea level) – I decided to depart before the smoke or my disposition worsened.

My last look south from the summit

California’s natural landscape is very dynamic and has always been shaped by wildfire – this is not likely news to anyone. But it all changes when one factors unstoppable population growth, historic drought, community building in hazardous zones, and ultimately – repeated human-caused fires (not wild: power tools, downed power lines, bullets, sparks). We are helping to quickly transform and destroy the landscape we love.

Among the books in my collection is Charles Little’s The Dying of the Trees. Written in 1995, Little offers insights to dying forests around our globe. Much of it human caused, but not much mention of climate change. It was at that point beyond our knowledge and not part of our everyday lexicon. Only twenty-one years later, climate change has become very real very fast, and very threatening to our own ways of life. Every western U.S. state is suffering deeply from its effects; models predict it will only worsen.

The Sierra Nevada I once knew is no longer. Attributing blame is unimportant; acknowledging it and acting on it is paramount. Should any reader of this essay be among those who deny the overwhelming science and evidence of climate change , I invite you to California for a very personal and sobering tour.

You are visiting the blog of fine art landscape photographer Michael E. Gordon. For information and photographs, please visit his official website. You can also find Michael on Facebook.